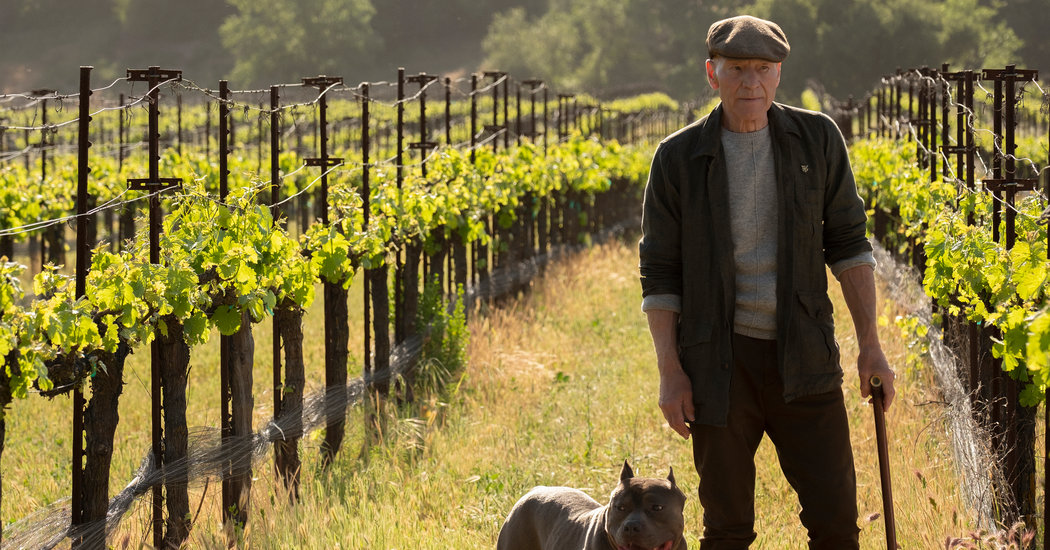 “Star Trek: Picard” opens with Jean-Luc Picard, former captain of the Starship Enterprise, having a nightmare, and doesn’t that sound right. Through seven seasons of “Star Trek: The Next Generation” and four movies, Starfleet’s most stalwart officer seemed always to be tripping out at key moments: pinging between time streams or dreaming alternate lives; forced into hallucinations by the Ferengi or assimilated by the Borg.

It was a storytelling device that reflected the endearing, if slightly contrived, makeup of the “Star Trek” franchise’s most popular character. Picard always did the right thing, but his moral certainty, bordering on self-righteousness, was balanced by doubt and guilt that could become temporarily crippling when it served the writers’ purposes.

And in “Star Trek: Picard,” which begins its 10-episode premiere season Thursday on CBS All Access, there’s a full complement of doubt, guilt and feelings of uselessness. Picard may be enjoying retirement on his family’s lovely French vineyard, but he’s not content. In the time since his last appearance (in the film “Star Trek: Nemesis” in 2002), calamities have transpired, involving an exploding star and a compromised rescue mission, that have tarnished his reputation. This cannot stand, of course, and before long — or at least by the end of Episode 3, the last one given to critics — he’s found a ship, put together a ragtag crew and set out on a mission of redemption.

The arrival of a new “Star Trek” series (the seventh), especially one whose roots go back to the 1980s, is an obvious occasion for nostalgia and Easter egg-hunting, and “Picard” does not disappoint. The dream scene brings Picard (Patrick Stewart) together with Data (Brent Spiner), the loyal android who sacrificed himself at the end of “Nemesis.” Poker, Earl Grey tea and “Blue Skies” are offered up as tokens for the faithful.

But what’s more noticeable are the differences. “Picard,” the second streaming “Star Trek” series (after “Discovery”), is a peak-TV experience, and it immediately feels — on the surface, at least — as if it could be the franchise’s best small-screen offering.

“Next Generation” put out mostly 26-episode seasons from 1987 to 1994, back in the day when ambient mediocrity went along with bulk production and modest budgets, and a show could succeed handsomely on the basis of Stewart’s Shakespearean assurance, Spiner’s winsome mugging and the enduring appeal of Gene Roddenberry’s 1960s utopianism. (Also, really tight uniforms.)

The new show, created by a committee that includes the executive producer Alex Kurtzman and the novelist and screenwriter Michael Chabon, is a modern animal, beginning with its short season and, most likely, bigger episode budgets. It’s a single serialized story, partly in the ubiquitous form of the procedural mystery, with a former Romulan agent (Orla Brady) putting all that futuristic technology to use in helping Picard investigate ominous events.

It also nods to our current politics, incorporating a refugee crisis, terrorism and threats from a superpower fallen on hard times. Picard, thundering that Starfleet and the Federation have abandoned their humanitarian responsibilities, could be positioning himself for the Democratic primaries. (On the other hand, “Picard,” with its focus on Romulans and androids, has a distinct lack of non-humanoid faces in its early episodes.)

And along with this comes the style you’d expect: polished and restrained writing without the flat-footed corniness that marked “Next Generation”; credible, if routine, action scenes without the hilarious stiffness of decades of phaser battles. No dry-dock scenes of giant starships set to stirring theme music. (Yet.) Stewart is as charming and naturally charismatic as ever, but the general level of the performances around him is significantly higher, and appealing actors like David Paymer, Jamie McShane, Michelle Hurd and Ann Magnuson pop up in roles large and small.

All of which is to the good. And you’d think it would also be good that the plotting of the story, involving the sudden appearance of a young woman with abnormal powers (Isa Briones) who catalyzes Picard’s curiosity and discontent, is complicated and elliptical. But that’s where some reservations set in, especially if you’re not familiar with “Next Generation” and the Picard films. Multiple and confusing threads are introduced in the it’ll-all-make-sense-later manner; the first three episodes are all setup, and your patience may flag. It’s possible that the season will tell a story in 10 episodes that the original series would have dispatched in one or two, with jokes. (“Picard” has already been renewed for a second season.)

That setup brings Picard to the edge of space (in a scenario reminiscent of “Star Wars,” with Santiago Cabrera in the Han Solo-Poe Dameron rogue pilot role). True fans will stick it out to see Stewart point his finger and utter the magic word, no matter how long this new model makes them wait.