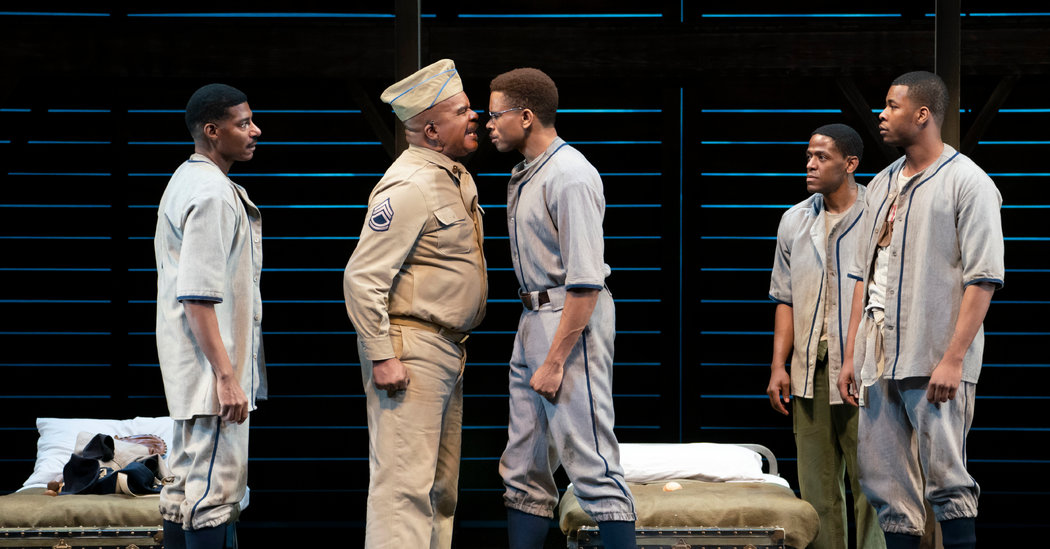 When Capt. Richard Davenport, a lawyer with the Provost Marshal General’s office in Washington, arrives at a Louisiana army base to investigate a murder, he is the first black officer most of the men stationed there have ever seen. Their diametrical reactions to him — the white officers shocked and hostile, the black grunts busting with pride — tell you everything you need to know about race relations in the segregated military in 1944.

Well, not quite everything. As Davenport is about to discover in “A Soldier’s Play,” the Pulitzer Prize-winning 1981 drama by Charles Fuller, racism is a disease that infects whatever it touches. Even the murdered man, Sgt. Vernon C. Waters, is not immune, though black himself. He hates his own race so virulently that almost everyone, from the Ku Klux Klan to his own corporal, has a motive for killing him.

This provides “A Soldier’s Play,” which opened on Tuesday at the American Airlines Theater, the solid if programmatic structure of a police procedural: Interrogate, rinse, repeat. It also provides, or at least did for white audiences when it premiered, a pair of novel themes. Now less novel, they still remain news: Colorism has not gone away, nor has the military, long since integrated, stamped out racism among its ranks.

But the themes and the structure can sometimes seem at odds. Not, apparently, as originally produced by the Negro Ensemble Company, when Frank Rich, writing for The New York Times, called it “a mature and accomplished work.” Nor in the excellent 1984 movie, retitled “A Soldier’s Story,” which uses plenty of close-ups to keep the focus on the characters instead of the plot machinery.

Onstage, though, the loud ticktock of the investigation too often drowns out the emotion — an effect perhaps enhanced by the flattening of the genre brought on by endless “Law & Order” spinoffs and reruns. In any case, whether “A Soldier’s Play” is a great stage drama regardless of its flaws is something its bumpy but worthy Broadway debut, directed by Kenny Leon for the Roundabout Theater Company, cannot answer. Despite some powerful acting, it is too distracted to make the case.

Davenport (Blair Underwood) does not have that problem; the one trait Fuller endows him with is ferocious attention to mission. (Underwood, in an otherwise unexceptionable performance, adds another trait — pandering sex appeal — in a gratuitous flash of well-toned flesh.) Though he drives the plot, he is almost a bystander to it, allowing the soldiers he questions to spin out their views of Waters (David Alan Grier) in flashbacks that sometimes have more flashbacks within them.

The views are not pretty. Waters — played in the original and in the film by the hair-raising Adolph Caesar — is part sadist, part eugenicist, and so determined to avenge his own powerlessness as a black man that he is willing to destroy other black men to do it.

Fuller has said he based the character, who commands a barracks of former Negro League baseball players, on the kind of person he encountered while living in the projects: “someone who wanted to be a king in a place that didn’t need a king.” But Waters, with his fixation on purifying his race of its “lazy, shiftless” “geechy” throwbacks, its “singin’, clownin’, yas-sah-bossin’” embarrassments, is no harmless martinet. Instead he is, in a way, magnificent, recalling the great, mysterious evil of military men like Claggart in “Billy Budd” and Iago in “Othello.”

Grier is unable to achieve that grandeur here. Though he appeared in smaller roles in the original production and in the movie, and clearly understands the character, he is naturally too likable — or his years in sketch comedy have made him seem so — to convey a threat that is larger than Waters himself.

You get a sense of that threat more vividly from the men in his command, who have no way to defend themselves against the machinations of a maniac. As punishment for a minor offense, Waters strips one of them, Wilkie, of the stripes it took him 10 years to earn. Another, Peterson, gets badly beaten in an unfair fight that Waters provokes. A third, Memphis, is framed by Waters (in a separate incident) for a murder everyone knows he didn’t commit.

The three actors who play these men — Billy Eugene Jones, Nnamdi Asomugha and J. Alphonse Nicholson — are excellent, but the production doesn’t capitalize on their performances to build the show into a riveting ride. Transitions between scenes are especially awkward on Derek McLane’s abstract barracks set and are sometimes further saddled with florid dance elements it might have been better to have a choreographer stage. (None is credited.) The deployment of music, mostly traditional songs and blues, is likewise erratic.

But if the power of “A Soldier’s Play” is sometimes attenuated, it is at other times enhanced. Leon draws smart connections between Fuller’s portrait of black men trapped in a system with no viable choices and the prison-industrial context of our time. When Wilkie suggests to Davenport that Waters’s assailants were probably not Klansmen because his uniform was not defiled — “They usually take the stripes and stuff off, before they lynch us” — it now comes across as a double-barreled insight, both a clue in the case and a tiny poem of fatalistic despair.

Fuller could not have been thinking, in 1981, of the daily roll-call of dead black youth that horrifies us today, or the estimated one in three black American men likely to be incarcerated during their lifetimes. But he definitely had the fate of his race in mind. Though Davenport (it’s no spoiler to say) eventually gets his man, wrapping the investigation up neatly and gaining the respect of at least one white officer (Jerry O’Connell) in the process, he also delivers, in a single tossed-off line — a line cut from the movie — Fuller’s frightful kicker.

Here, Leon could not be clearer, and as Nipsey Hussle’s “Perfect Timing” brings us into the present, that abstract barracks begins to look a lot like a jail, or a morgue.