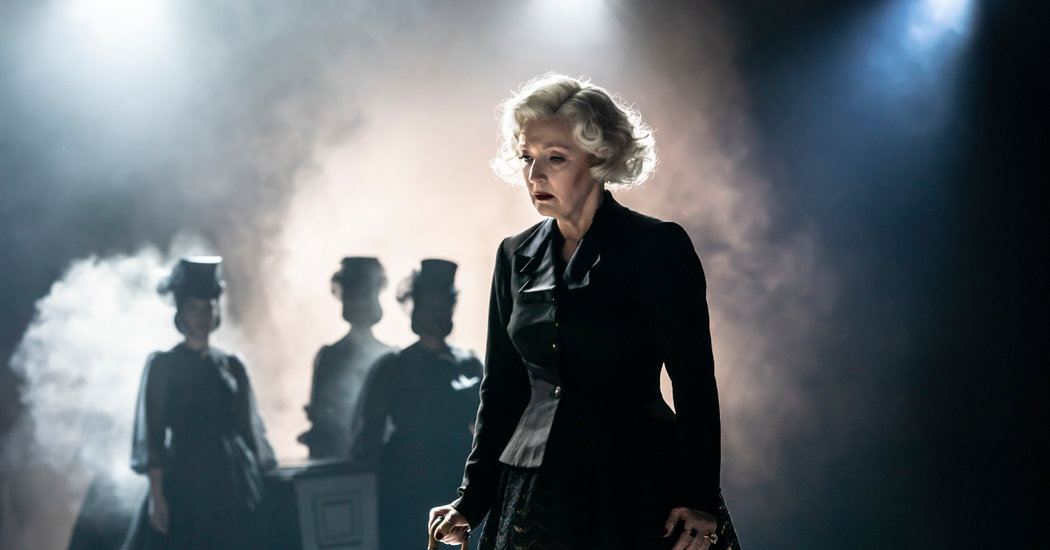 LONDON — Nobody does implacable like Lesley Manville. That steely resolve she has so peerlessly embodied onscreen (her Oscar-nominated performance in “Phantom Thread”) and onstage (her Olivier-winning Mrs. Alving in Ibsen’s “Ghosts”) has been polished to a glittering, icy-blue sheen in “The Visit, or the Old Lady Comes to Call.”

That’s the full title of Tony Kushner’s very protracted adaptation of the Swiss dramatist Friedrich Dürrenmatt’s 1956 classic, which opened on Thursday at the National Theater in London. And while Jeremy Herrin’s three-and-a-half-hour production suffers from terminal bloat, it is undeniably blessed in its leading old lady, whom Manville shapes as a couture-crafted entity beyond good and evil. When she declares, “I am a myth,” you aren’t about to argue with her.

Manville’s character, Claire Zachanassian, is afforded this spot at the pinnacle of world-warping amorality because she is the richest woman on the planet. And, really, what good is money if you can’t use it to get even with those who have done you wrong?

And so Claire, after many years and many husbands, journeys back to the squalid little town — called Slurry, in Kushner’s version — that rejected her as a pregnant, unwed 16-year-old. She has come expressly to get a bit of her own back, which means reclaiming, and destroying, one Alfred Ill, the lover who abandoned and denied her all those years ago (played here by a blustery Hugo Weaving). It is a process that lures an entire town into a grisly Faustian bargain.

That’s a fabulous premise for a pitch-black social satire. Yet “The Visit” has usually sounded more fun, and more chilling, than it winds up being onstage. That’s because, if the actress playing Claire is at all compelling, you know from the moment you see her that her victory is a done deal. Nonetheless, the bulk of the play is devoted to watching the righteous folks of Slurry succumb, both instantly and oh-so-slowly, to an epidemic of soul-sapping greed.

Kushner was reported to be working on an adaptation of “The Visit” as long as five years ago, as a possible project for (don’t you love it?) Oprah Winfrey. You can see why it would appeal to the author of the epochal “Angels in America,” a writer famously preoccupied with the moral wages of capitalism, especially in the United States.

Relocating Dürrenmatt’s tragicomic fable from middle Europe to a dying factory town in upstate New York in the mid-1950s has allowed him to take uncharacteristically crude potshots at all-American consumerism. (Oy, those aggressively superficial television reporters in the third act!) In fact, the best argument this production makes against conspicuous consumption is Herrin’s staging, which ostentatiously deploys vast resources to dispiritingly empty effect.

Vicki Mortimer’s arresting, bleak black steelscape of set is populated with scores of performers, variously incarnating citizens, schoolchildren and a totally unnecessary fashion parade of a female entourage of Claire. The revolving stage of the National’s Olivier Theater, frequently clouded with dense smoke, moves almost as much as they do, while a band in a windowed box plays smoky, film noir-style jazz.

Yet these disparate elements never generate anything like suspenseful momentum, and even when the stage is chock-full of people, it feels curiously untouched by real life. That’s partly, I think, because the mostly British cast is trying way too hard to be American (or “Amurrican”). As the gone-to-seed object of Claire’s obsession, a too-hearty Weaving — a fine Australian actor who memorably appeared opposite Cate Blanchett in “Uncle Vanya” — appears to be auditioning for a vintage cowboy television show.

Even more unfortunate is the cast’s collective failure to find a rhythm that would accommodate the play’s willful combination of joltingly different tones and styles, ranging from vaudeville sketch material to baroquely ornate speechifying à la Kushner. Dialogue is often delivered falteringly, perhaps a consequence of last-minute trims. (The production had been clocking in at more than 4 hours in previews.)

The signal exception to such uncertainty is Manville. Gloriously clad in Moritz Junge’s facsimiles of the latest Paris fashions in the mid-1950s, she bestrides her character’s paradoxes with Olympian style and force. The body of the death-defying Claire, who has been the sole survivor of assorted exotic accidents, may consist largely of prosthetic body parts. (Love those custom-made legs.)

Yet, when she says that time ultimately changes no one, you believe her. Claire’s prevailing social manner may be a kind of cold campiness, with touches of a weary Mae West. But you have no difficulty in recognizing the passionate young woman of decades earlier, who was said to have carried the light of the moon within her.

When Claire first sets eyes on her long-lost Alfred — her prey, her enemy, her forever lover — Manville’s gaze is all-consuming and all-accepting. When she speaks shortly after of how “we’re still what we were,” listen to how she lingers on that simple word “still.” As she pronounces it, with a confidence that is almost cosmic, that single syllable summons one truly scary eternity.

The Visit, or the Old Lady Comes to Call
Through May 13 at the National Theater, London; nationaltheatre.org.uk.