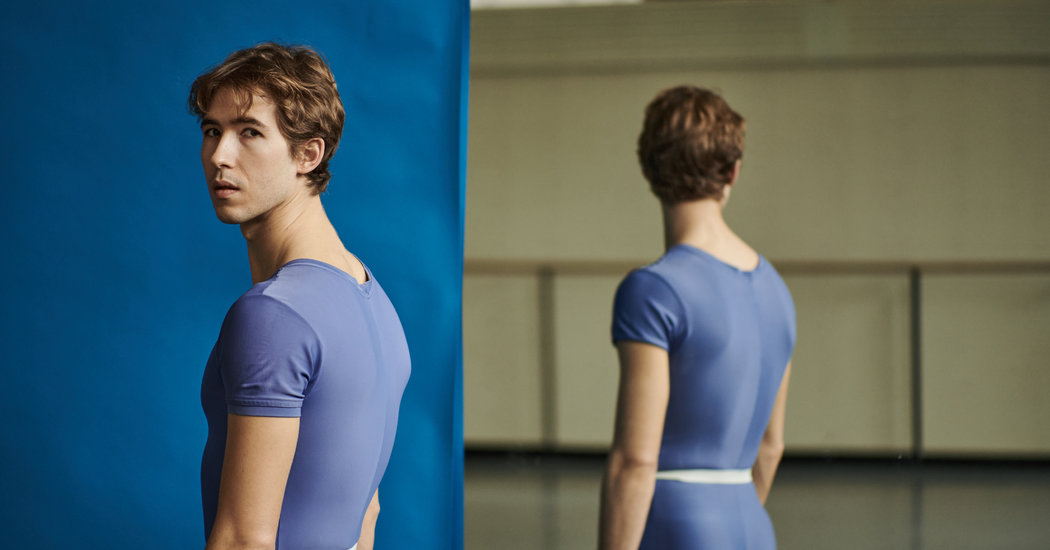 Joseph Gordon has a look: sun-kissed bangs that flop over dark eyebrows and a lean swimmer’s body. If he traded his unitard for a wet suit, he could easily be a surfer hanging out at Rippers, the boardwalk haunt at Rockaway Beach. But then you go to the ballet and there he is. The prince.

Mr. Gordon hasn’t been on a surfboard since he was 13, but the thought of it lit up his face. His mother was an avid surfer. “I love the ocean,” he said. “I think there’s something about ballet that feels like water.”

He dances as if he were moving through it. At 27, Mr. Gordon is youngest principal at New York City Ballet where, in February, as part of its winter season at Lincoln Center he will make his debut in “Swan Lake” as Prince Siegfried. “I think I want to play him more as who I am, which is youthful,” he said. “Feeling like my whole life is ahead of me. When you’re young, you don’t think about the repercussions of anything. You just do.”

Mr. Gordon is that rare sort of dancer who seems to be able to do just about anything. For one, he’s the right size: His height — he’s nearly 5-foot-11 — makes it possible for him to partner a variety of ballerinas. He can pull off traditional roles like Siegfried, but with his poise and athleticism, he’s just as at ease in the neoclassical ballets of George Balanchine and Jerome Robbins’s works, with their less-is-more aesthetic.

He even gives mythical characters a subtle, modern air. Last spring, as Oberon in Balanchine’s “A Midsummer Night’s Dream,” he was sleek and dazzling. Mr. Gordon has a virtuosity that’s unforced yet polished; there’s nobility, but it isn’t old-fashioned.

Lauren Lovette, a fellow principal who has known Mr. Gordon since they were teenagers at the City Ballet-affiliated School of American Ballet, recalled how tiny he was as a 14-year-old. “He was a smaller guy with a bowl-cut hairstyle,” she said. “Very introverted.” She added: “I just remember — not writing Joe off — but thinking, oh, he’s just young. Little Joe. That’s what everybody called him.”

Now, Ms. Lovette said, she realizes: “We all underestimated him. He worked so hard very quietly. He’s like a dark horse that’s come along, and I think he’s just blooming.”

Mr. Gordon may be a natural dancer — “so calm and clear,” as Jonathan Stafford, City Ballet’s artistic director, put it — but his early life wasn’t nearly as easy. As an only child growing up in Phoenix, he had to be self-sufficient. His father died a week before his ninth birthday.

“It ripped apart my whole family,” he said. “My mom was never the same — she really struggled with substances, was depressive. So much so to the point where she wasn’t stable. She could be my mom for periods and then just completely not be there at all.”

When he was auditioning in Phoenix for a second time for the School of American Ballet, he said, she wouldn’t give him his birth certificate or drive him to the audition. “That was really my impetus to come to New York, because I just wanted to get away,” he said. “Then it became even harder because how do you manage somebody like that from across the country at 14?”

Ms. Lovette, who featured Mr. Gordon in a ballet she choreographed as a student, has since learned more about his life and upbringing. That has allowed her to understand “why he seemed so quiet, so far away,” she said, “and who he is on a deeper level.”

It was dance, he said, that kept him going, both as structure and emotional outlet. “When I look back at S.A.B. years, I’m like, whoa, I was so stressed out all the time in a way that I wasn’t conscious of,” he said. “I would rebel — I felt like, ‘You don’t know me, and you don’t know my life and I’ve handled myself for this long and I’m perfectly fine.’”

When he was 22, his mother died, after which he found, unexpectedly, a sense of freedom. “Of course, it’s painful,” he said, “but I don’t feel like I’m suffering any more.”

All the same, Mr. Gordon regrets that his mother never got to see him dance as a soloist or a principal; he remembers her telling him about his first performance. He was 3, and he performed a tap dance wearing blue-sequined suspenders. “I was the only boy in the class with all these girls in polka-dot dresses,” he said. “The curtain goes up on all these 3-year-olds: They’re not going to do the dance, but I did the dance and apparently I came offstage and said, ‘I love it!’”

He studied at the Phoenix Dance Academy and at Ballet Arizona, where he heard about the School of American Ballet. At 13, he and his friends auditioned. He didn’t make it that first time.

“I was really small for my age, like two bone sizes behind,” he said. “I actually saw an endocrinologist. I was just a late bloomer.”

He was accepted the following year — still small, but on the verge of a growth spurt. And while he loved his teachers, he struggled. His family life was in shambles. And he said he felt like the school had written him off.

“I was really worried,” he said. “I wanted to dance at New York City Ballet. I just remember getting so upset. They kept saying, ‘Where do you want to dance?’”

While at the school he even auditioned for the Paris Opera Ballet and received a contract as an understudy. He credits Darci Kistler, the former City Ballet principal and teacher, with giving him a boost of confidence at a significant moment. (She left the school after her husband, Peter Martins, retired as the company’s ballet master in chief amid accusations of abuse and physical misconduct. Mr. Martins has denied the accusations.)

Ms. Kistler was the one person who told him: “You don’t have to worry. What do you want to do?” he said. “And I said, ‘Of course, I want to dance here,’ and she was like, ‘Well, you’ll dance here then.’ It just felt like, finally, a moment of clarity.”

He became an apprentice in 2011 and joined the corps de ballet the following year. In 2017, he was elevated to soloist and then, in 2018, principal. Mr. Stafford, who promoted him, said: “You can talk about natural buoyancy, a very clean and strong technique — his turns are so spectacular. But we don’t just see it in rehearsal and get lucky onstage. He does it every time onstage and he’s just so genuine.”

Looking back, Mr. Gordon said he wasn’t certain that Mr. Martins would have promoted him this quickly. “He would pull me into these meetings and tell me that I wasn’t working up to my potential, and I really struggled with that,” Mr. Gordon said. “People tell you, ‘Don’t focus on other people,’ but in comparison to some of my other colleagues, I was like, what are you talking about?”

In retrospect, he thinks that Mr. Martins was right. “He wasn’t saying, ‘You’re a mess,’ he was just kind of saying, ‘I don’t see that you’re fully committed,’” Mr. Gordon said. “It’s hard. You’re young and you go from being a student to a professional overnight, and you want to go out and have fun. He basically said, ‘You have to make a choice as to what you want, and I had to make the same decision, and if you want to have this career, I’ll give it to you.’”

Mr. Gordon became more serious and was cast in principal roles. He forged a relationship with Adrian Danchig-Waring, now his boyfriend and a fellow principal. He also injured his knee. But as soon as he returned to the company, he was named a soloist. “I probably came back way too soon, but I’m happy I did because I think Peter saw my perseverance,” he said. “I did ‘Sleeping Beauty’ and then four months later he was gone.”

When Mr. Martins retired, Mr. Gordon was torn. “Having Peter around could be so much pressure,” he said. “You could feel so unseen. If he didn’t smile at you, you would be crushed and that was terrible, but boy did he make you dance.”

Many of their corrections have had to do with musicality and counts. “It changes the dynamic and the picture becomes so clear, so distilled all of a sudden,” he said. “It just elevates the whole thing.”

And that creates the right space for taking the dance to the stage, which has always been Mr. Gordon’s release. “In this career, you work so hard,” he said. “It can feel so grueling, and you can get so stuck in the minutia and details. Really, the only time you get agency is in the show. Nobody can say stop. Nobody can say that was a bad choice. It’s your time.”