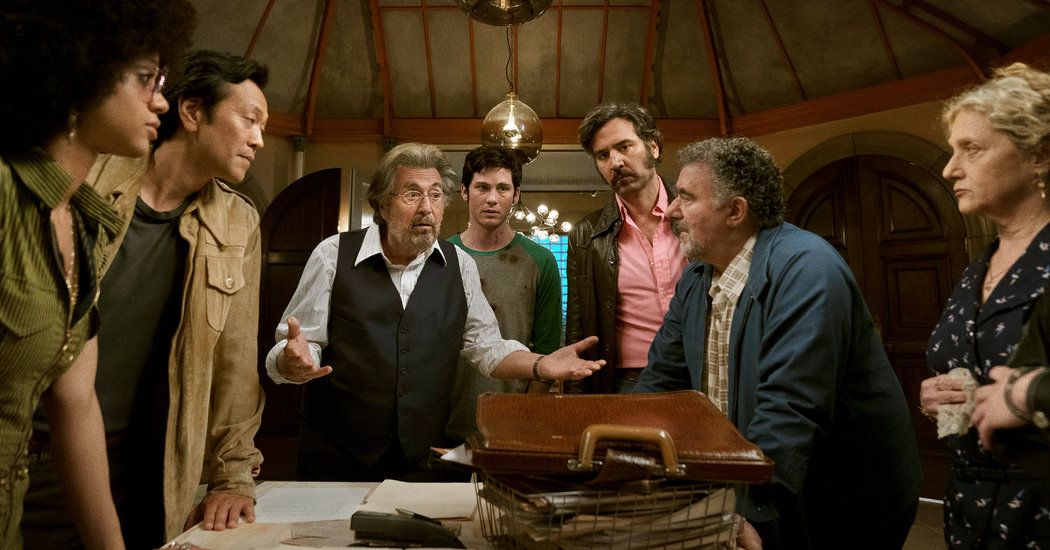 When Logan Lerman was offered the lead in “Hunters,” he did what all actors do: He cast about for inspiration.

For portions, he had only to look inward. Like him, his character Jonah Heidelbaum was Jewish, allowing Lerman to draw from experience both personal and inherited. As for the fact that Jonah also helps hunt down and kill Nazi fugitives trying to start a Fourth Reich in America … well, the character’s motivation was easy to understand.

Still, other aspects were harder to pin down — for one thing, Jonah was from the mean streets of ’70s Brooklyn and Lerman, 28, grew up in Los Angeles. So the actor looked to gritty New York movies from the period — specifically Al Pacino’s work in films like “Serpico” and “Dog Day Afternoon.”

“I was looking at ‘Panic in Needle Park,’ I was looking at all these roles that he did,” Lerman recalled. He sent photos to the pilot’s director, Alfonso Gomez-Rejon, the first of which was a brooding image of a young Pacino.

“It was like, this is who I want to model the character after,” he said. “I never told Al that.”

It wasn’t for lack of opportunity. Lerman didn’t know it at the time, but Pacino was about to sign on for a central role in “Hunters,” which debuts Feb. 21 on Amazon Prime Video. (Jordan Peele is an executive producer.) For Lerman, that meant the beginning of an experience that “was just beyond expectations,” involving a man he called “one of the greatest actors ever.” For Pacino, who in conversation graciously deflects such praise, talk of the old days prompted nostalgia, but also a few laughs.

“I just can’t remember the ’70s — I mean, it was wild times,” he said, chuckling, in a phone interview last month. “At that time in my life, I don’t think I was completely, uh … sober? Everything came like this monsoon.”

It’s hard to believe that one of the world’s most celebrated actors might, at 79, still have boxes he needed to check. But the entertainment industry has changed more in the past 10 years than the previous 40, and Pacino is adapting, finding late-career success in forms that didn’t exist a few years ago. His ninth Oscar nomination came via a Netflix film, Martin Scorsese’s “The Irishman.” “Hunters,” which marks his episodic television debut, will be released on Amazon in a bingeable 10-episode chunk.

“Hunters” isn’t Pacino’s first small screen role. He has won two Emmys with HBO, in 2004 for playing Roy Cohn in Mike Nichols’s mini-series adaptation of “Angels in America,” and again in 2010 for playing Dr. Jack Kevorkian in the TV movie “You Don’t Know Jack,” directed by Barry Levinson. In 2013, he was nominated for playing the title character in the David Mamet biopic “Phil Spector,” also for HBO.

As Pacino noted, however, “the HBO things were so much more like a film.” Long-form television, with its longer arcs and unique production rhythms, represented something new and ultimately irresistible.

The role that lured him was Meyer Offerman, a wealthy Holocaust survivor who leads a band of multicultural, multitalented assassins who sniff out Nazis hiding in plain sight. Set in 1977 Brooklyn, the show draws inspiration from the real-life Nazi hunters like Simon Wiesenthal and investigators with the Justice Department’s Office of Special Investigations. It imagines a world in which Meyer’s group operates entirely in the shadows and outside the law, acting as judge, jury and executioner.

Meyer and his hunters aren’t exactly superheroes, in that they don’t have supernatural powers or wear spandex. Jonah himself begins as a reluctant accomplice, a comic-book nerd thrust into the hunters’ world by a family tragedy. But the show frames them that way, embracing a brightly colored, self-aware pulpiness that nods to comic book lore (Batman references abound), as well as to exploitation flicks of the ’70s like “Death Wish” and “Cleopatra Jones.”

David Weil, the series’s creator, said that both the story and the genre-inflected approach came from a deeply personal place. Like Jonah, he grew up hearing stories from a Brooklyn grandmother who had survived the Holocaust.

“Hearing those stories as a young kid, they felt like the stuff of superheroes in comic books, and that kind of became the lens through which I began to see the world,” he said. “It was a world of great good and great evil — a world of a lot of death and suffering and darkness, but a world where hope was possible if we took it upon ourselves to make it so.”

The fantastical elements notwithstanding, Weil and Nikki Toscano, as showrunners, strove to ground the narrative in historical fact, citing secret government programs like Operation Paperclip, in which Nazi scientists were recruited to work in the United States after World War II. Other scenes draw from historical experiences at Nazi death camps.

“There’s a great deal of reverence paid to anything that we cover that includes the Holocaust, because part of the show does take place during the war,” said Toscano, who hadn’t heard of Operation Paperclip before meeting Weil. “And yet there are some heightened elements of violence that these Nazi hunters are imparting on their victims when they find them.”

The action-hero assassins of “Hunters” are clearly fictional. (Meyer, as much Professor X as Wiesenthal, is the closest Pacino has come to playing a comic-book character since his Oscar-nominated performance in “Dick Tracy.”) But vigilante assassinations did occur historically, as in 1985 when Tscherim Soobzokov, a former Waffen SS soldier, was killed by a bomb outside his home in Paterson, N.J.

“Everything we put into the show could have happened, it could be true,” Weil said. “The history books may not have caught it, the newspapers may not have covered it, but we like to play with the idea that this may have all actually happened.”

However playful, “Hunters” is, at its core, intensely serious. Flashbacks set in concentration camps are unsparing. Revenge is a moral quandary served cold and soaked in blood — all at a time when in the real world, anti-Semitic crimes are rising.

Still, the shifts in tone and genre were a big part of what gave the series such an “interesting style,” Pacino said. And it was evident from the first couple of scripts, he added, that the story was intensely personal for Weil.

“It varies,” Pacino said of the style. “It’s generally surprising, but it’s always on the line — sometimes it’s outright horrifying, and then it’s also tongue-in-cheek.”

Pacino exuded warmth by phone, joking often in his distinctive raspy cadences and revising his thoughts in real time. He admitted he still thinks of “TV” as mostly news and sports and “sitcom kind of things,” and he wondered whether shows like “Hunters” should be called something else. (“Call it, I don’t know … what’s a good name?” he mused with a laugh. “Big screen TV?”) But whatever he called it, it was clear from conversations with cast that he had approached his role with inquisitiveness and dedication, often using moments of levity to pry open a scene.

“He has a mischievous streak that really works for me and that is very fun to play with,” said the series’s female lead, Jerrika Hinton, who plays a closeted F.B.I. agent struggling to separate the good guys from bad. Together they dug in, cracked jokes, tore scenes apart and put them back together. “It was nice finding the ways to needle each other, to amplify the subtext of the scenes,” she said.

As the shoot progressed, Pacino and Lerman’s relationship deepened. They met on weekends to “crack open the scripts,” as Lerman put it. When they weren’t swapping notes, Pacino shared stories about his roles in all those old films Lerman loved.

At bottom, Lerman argued, “Hunters” turned around a single central dilemma: “Does it take evil to fight evil?” It was a difficult question, and not many actors have grappled with difficult questions more prominently or on a grander scale than Pacino. But he always brought things back to the task at hand.

Told of Lerman’s impressions of him, Pacino responded with characteristic deflection. His mentoring instincts kicked in naturally, he said, because of his affection and respect for the young actor.

“He’s a natural, that’s all there is to it,” Pacino said. “He doesn’t really need anything from me, but at the same time, he doesn’t have the experience. At least you learn a little something going through all this stuff you go through in this world we’re in — of fear and what happens to you, and how you go along and success and all that.”

He laughed — another quick revision: “So you learn a couple of things, but most of which are not transmittable,” he added. “They’re just not.”