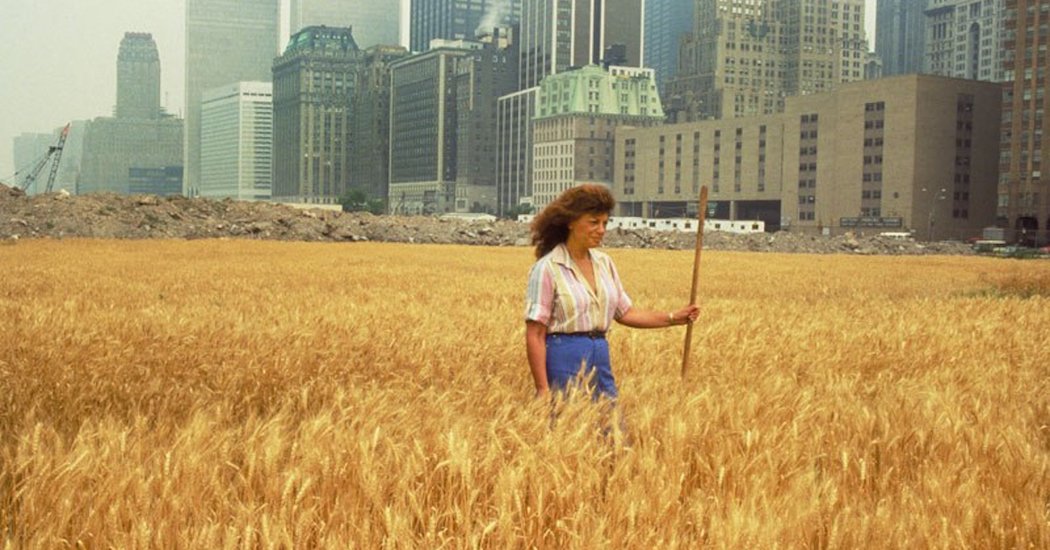 We’ll be lucky this art season if we get another exhibition as tautly beautiful as “Agnes Denes: Absolutes and Intermediates” at the Shed. And we’ll be right to ponder why this artist, who was born in Budapest 88 years ago and has lived in New York City for more than 60 years, is only now having a retrospective here.

Must neglect be the price paid by brilliant art that lies outside ready marketing categories, that baffles conventional critical thinking, that manages to be, paradoxically, mortality-haunted and hopeful? Too often the answer is “yes,” particularly if the art is by a woman.

I learned of Ms. Denes late, in 1982, by which time she already had a significant career. I was living in Lower Manhattan, two blocks from the Hudson River and an empty grass-stubbled urban prairie that had been formed by landfill excavated from the World Trade Center building site. (Battery Park City sits there now.)

One spring day I noticed a truck dumping fresh earth at the site, then people digging long furrows and sowing seeds. In early summer green shoots came up, grew tall, turned tawny yellow. By mid-August, two-acres worth of waist-high wheat was ripe for cutting.

Kansas had landed in Manhattan! If you stood in the middle of the field — and anyone could — you had views of the twin towers rising nearby and the Statue of Liberty off to the south. The scent there that hot summer was pure country (as were the bugs). Then one day a thresher showed up and harvested the crop. I wasn’t around for that, but when I dropped by the landfill later I remember feeling shocked and dismayed to find the field bare, the wheat gone.

The planting was a work of environmental art conceived and produced by Ms. Denes, with the help of a small crew, on a commission from the Public Art Fund. The title she gave the project — “Wheatfield — A Confrontation” — nailed its political intent, though you understood it, without prompting, at the sight of two acres of breeze-swept natural bounty, accessible to all, sprouting beneath the silos of capitalist greed that were the twin towers. (The wheat ended up traveling to 28 cities across the globe in an exhibition called “The International Art Show for the End of World Hunger.”)

You can still sense the power of that image from documentary photographs and a 1982 video of the artist being interviewed by the NBC newscaster Jane Pauley, all on view on the Shed’s fourth floor, where the superbly installed survey of nearly 150 works, spanning Ms. Denes’s career, begins.

Her focus on ecology, on the fear of present decay and the hope for future survival is clear from the start in sequential shots of a 1968 solo performance, “Rice/Tree/Burial,” done in upstate New York, in which she planted grains of rice, bound trees with chains and buried time-capsule copies of her own poems. Yet most of her work, early and late, is the form of meticulously executed diagrammatic drawings based on scientific and philosophical subjects: the workings of the brain, the complexities of language, the possibilities of post-Anthropocene habitation — in short, the fundamentals of what she is not afraid to refer to as “human existence.”

In certain word-intensive pieces, like “Manifesto” (1969), which appears large on a wall outside the show, a tendency to abstract loftiness is tempered by plain-style language, with results that read like concrete poetry. Other, more purely graphic drawings have the flawless crispness of digital prints. (Ms. Denes was a pioneer in applying computer technology to art and in the 1970s was already forecasting the fate of knowledge-as-truth in a coming age of information overload.)

Religion and ethics enter the picture in a work in low relief called “Morse Code Message” (1969-1975). Made from bits of white plastic attached to a dark plexiglass ground, it translates biblical passages in which God lays down the law for mankind into a language — supposedly universal — of dashes and dots.

And there’s humor. An avowed feminist and one of the founders, in 1972, of the all-women A.I.R. Gallery (then in SoHo, now in Dumbo, Brooklyn), Ms. Denes takes satirical jabs at the workings of gender in an elaborate 1970 drawing, “Liberated Sex Machine,” that reduces the grand opera of sexual coupling to a user-unfriendly instructional chart.

All of this probably qualifies in some sense as Conceptual Art, which would make Ms. Denes a rare participant in a mostly male category. Yet her work has a speculative breadth and, most important, an attention to visual presence that much classic Conceptual work does not. She has basically carved out an independent, label-free niche for herself and has been occupying and expanding it for over 50 years.

Visionary is one label that does apply, though the art world has never been sure what to do with it, whether to trust it. Over the years, as she has taken on increasingly elaborate ecological projects, her drawings, which she calls a form of “visual philosophy” — have grown more ambitious. They include distorted world maps, in which the geopolitical relations we’re familiar with are unfixed. There are designs for cities that are also space stations, vehicles for exploration but also for escape.

Many of the designs are based on the ancient, energy-channeling form of the pyramid, but the pyramid is now relieved of weight and monumental function. Ordinarily rigid and vertically directed, the pyramid, in Ms. Denes’s drawings, stretches and twists, swells like an egg, curls like a snail, flies like a bird. Everything in the world, as this artist sees it, is in flux, subject to growth and decay, a dynamic that is dramatically embodied in her public projects.

Only a few of the many she has proposed in drawings have been realized. “Wheatfield — A Confrontation” is by far the best known, and was, of course, meant to be ephemeral. Another, still-intact public work, “Tree Mountain — A Living Time Capsule — 11,000 Trees, 11,000 People, 400 Years,” has a longer projected time span, though still a finite one.

Built in Ylojarvi, Finland, from 1992 to 1996, it consists of a handmade hill covered with trees arranged in a mathematically determined spiral pattern. Each tree has been planted by a volunteer who has been contractually granted ownership of it, valid for four centuries, and transferable generationally. The larger idea behind the arrangement is straightforward: Conservation is both an individual and collective responsibility, extending far into the future.

Photographs of “Tree Mountain” are in the show, as are plans for other projects that still exist only on paper or as models. One is for a system of artificial dunes to protect the storm-wracked Rockaways in Queens, N.Y. Another is for an air-cleansing virgin forest to be planted on landfill also in Queens. A third, and probably the least likely to be given the go-ahead any time soon, is for a Peace Park in Washington, D.C.

The qualities that distinguish such work from 1960s and ’70s Land Art, with which Ms. Denes has sometimes been associated, are the same qualities that mark her drawings: a combination of moral rigor and an uninvasive lightness of touch. And what separates her work from object-fixated, dollar-value art of the 21st century is an insistence on impermanence. (That the retrospective is happening in the cash-buttressed fortress of Hudson Yards is an irony surely not lost on her.)

Positioned almost in the center of the fourth-floor galleries is a 1969 installation called “Human Dust.” It has two main components. One is a poster-size wall text telling the story of an unnamed man’s life. “He was an artist,” it begins. “He was born fifty years ago, which means he lived app. 2/3 of his expected life span.” We get statistics: the number of his close relationships, the number of places he lived. We learn details of his appetite (“During his lifetime he consumed 4800 lbs. of bread, 140 gallons of wine”), and of his character (“He was unhappy and lonely more often than not”). The account, basically an obituary, concludes: “34 people remembered him or spoke of him after his death and his remains shown here represent 1/85 of his entire body.”

The remains are indeed on display: a clear glass bowl filled with fragmented bones.

As if in response to this somewhat unnerving memorial, the galleries on the second floor, where the show concludes, have a dusky chapel-like atmosphere. Many of the most extravagantly imagined late drawings are here, as is a model of the Queens forest, financed by the Shed, and two sculptures, also commissioned by the Shed for the show.

One, “Probability Pyramid — Study for Crystal Pyramid,” is a 17-foot-tall pyramid with inward curving walls. Made from thousands of 3-D printed white blocks and lighted from within, it has the presence of a traditional monument but looks like a giant lantern. It was conceived in 1976 to be even taller: 30 feet, a height that could, with the addition of more blocks, be reached in a future setting.

The other, a smaller piece, “Model for Teardrop — Monument to Being Earthbound,” comes with complications. Physically it consists of a dark round base with a glowing nylon teardrop — or a flame — floating above it, and it really is floating, held in midair by the force of electromagnets embedded in both the base and the form itself.

This piece, too, as seen in the show, is smaller than the artist originally envisioned it. Could it, too, be scaled up? Apparently there are no magnets strong enough to permit that, making this piece a monument designed to fail. But what is it a monument to? To the paradoxical dynamic that drives this artist’s finest work: rising, and falling, and rising. Living, and dying, and living. Can a tear and a flame coexist? Even be the same thing? In Ms. Denes’s world they can.