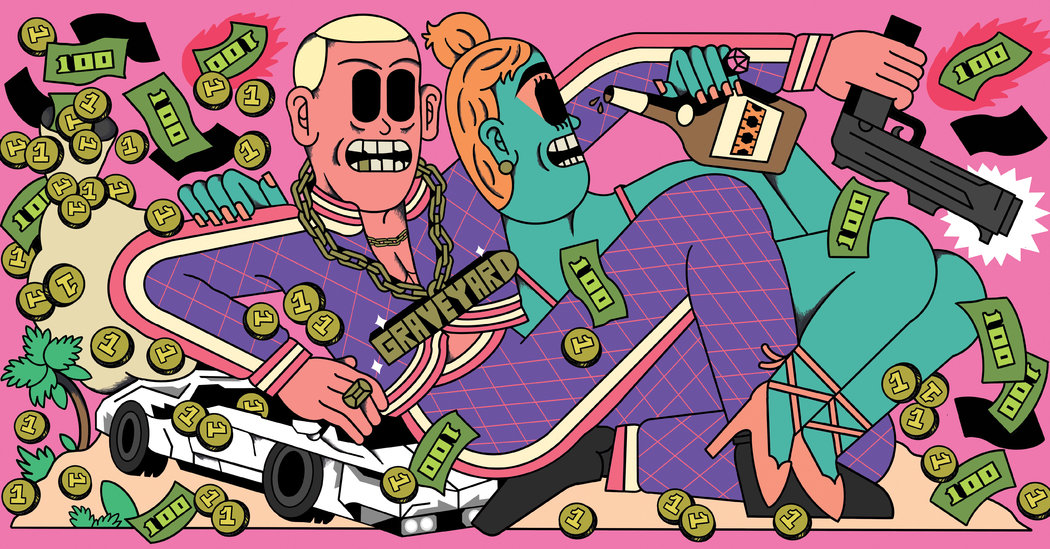 Stephen Wright wastes no time in setting up the premise of his new novel. In the opening paragraph, one of the main characters, Graveyard, thinks to himself, “Sweetbreads and applesauce … I need some cash real bad,” and, as if conjured by the declaration, a big canvas bag filled with fresh $100 bills falls from the sky, landing at his feet. He takes the bag home, where his wife, Ambience, asks, “Are we in more trouble now than we’ve ever been before?” He tells her no, but then reconsiders and offers, “At least I don’t think so.”

But in Wright’s bizarro vision of our world, if you can imagine it, it will come, more trouble than you believed possible. “Processed Cheese,” Wright’s fifth novel, opens with that magical bag of money falling from the sky, and its first pages are absolutely brilliant, a frenetic, hilarious rush of pure feeling that ends with “the best orgasm” that Graveyard and Ambience have ever experienced. And over the next 40 pages, the pacing is a thrill, as we watch Graveyard and Ambience put that money to good use, buying luxury goods from stores like Clawfoot&Residue and HouseOfNoRegrets in the TooGoodForYou District. Do they buy the finest alcohol? They do. Drugs? Yes. Guns? So many guns. Sex toys? Of course. A deluxe professional magic wand, lacquered and encrusted with diamonds? They would if they could.

Along the way, they find themselves in clubs named Contagion and ThrashingLimb, high on a drug called Ellipsis, rubbing elbows with the rich and famous, people like DJAcquisitionFee and VelvetRope and Effigy and TastyAshes and MisterMenu, a new-money celebrity who happens to be the previous owner of the aforementioned bag full of cash. (His wife, MissusMenu, threw it over the balcony of their 52nd-floor penthouse during an argument.) MisterMenu retains the services of a former lover, DelicateSear, now his executive vice president for context and control, to track down the money, and a goon, BlisterPac, to retrieve it. As the novel expands to include other characters, all in thrall to money and success, it’s clear that a reckoning is coming. Only a quarter of the way into the novel, you know there’s no way it will end well for anyone, that money can’t always buy a happy ending.

[ Read an excerpt from “Processed Cheese.” ]

Yet there are still nearly 300 pages left, and even Graveyard and Ambience become exhausted in their attempts to spend the money. They temporarily leave the country in order to reclaim that initial rush, but their hearts aren’t in it. And as the brand names and celebrity names pile up, along with a few bodies, it’s hard for the reader to hold onto the manic energy in Wright’s prose. He’s a masterly writer, with a wild sense of humor that he pushes as far as he can, but this fairy tale about our wealth-obsessed culture starts to drag. At one point, Graveyard asserts that money affects one’s perception of time, namely that “it goes slower and I’ve got more of it.” Eventually, you start to wish the money would simply run out.

“Processed Cheese” reminds me, in both tone and theme, of George Saunders’s short stories “Sea Oak” and “The Semplica-Girl Diaries,” or even Erskine Caldwell’s “Tobacco Road.” But those works have brevity on their side, layering their absurdity with very real concerns about the inescapable nature of poverty, a flash of strangeness that echoes far beyond the page. By the time I reached the end of “Processed Cheese,” with its inevitable showdown and reckoning, I felt overwhelmed by both the satire and the violence. All that kept me going was Wright’s sentences, so wonderful, so bizarre, $100 bills pulled endlessly from a canvas bag.